April is Esophageal Cancer Awareness Month and so for my Differently today, I’m going to give you a recap of my story in dealing with the disease.  I’m hoping that you will share it, forward it, like it, Tweet it, Pinterest it, Instagram it, or whatever the hell else you social media types are doing these days.  It isn’t going too far to say that in doing so, it might save someone’s life.

To start, let’s start with numbers.  The following chart shows the relative rates of occurrence of various types of cancer since 1975. 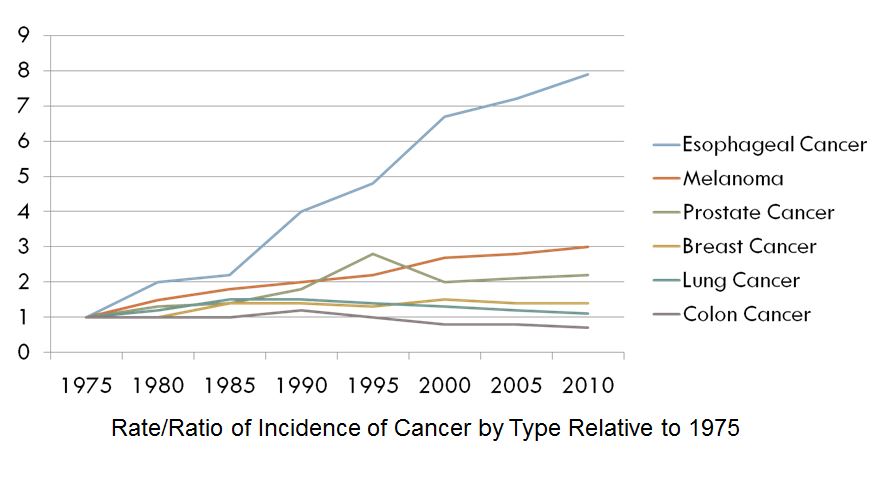 Shocking, huh?  Esophageal cancer is the fastest growing type of cancer in the United States, with a more than 600% increase over the last three decades.  This is mainly because of our diets, as our society has gotten less healthy in its eating habits and more obese.  It will affect 1 in every 125 men and 1 in every 435 women and while there are still relatively low overall numbers (less than 1 for every 10 cases of breast cancer),  if this keeps growing at this rate, it will be one of the most prevalent forms of cancer within a generation.

It is also one of the deadliest forms.  According to the National Cancer Institute, 18,000 people will be diagnosed this year and 15,000 of them will die from the disease.  Fewer than 1 in 5 survive more than 5 years.

Before we go any further, let’s answer a burning question… what the hell is an esophagus?  I’m glad you asked.  The esophagus is a long tube that extends from the back of the mouth to the stomach.  It is about 9 inches long and is made up mostly of flexible muscle tissue.  It contracts and expands to move food from the mouth to the stomach and helps to start to process it on the way down.  The esophagus passes through a hole in the diaphragm known as the “esophageal sphincter” (go ahead and giggle, you know you want to), and then connects to the stomach at the “gastric junction.”  Here’s a diagram: 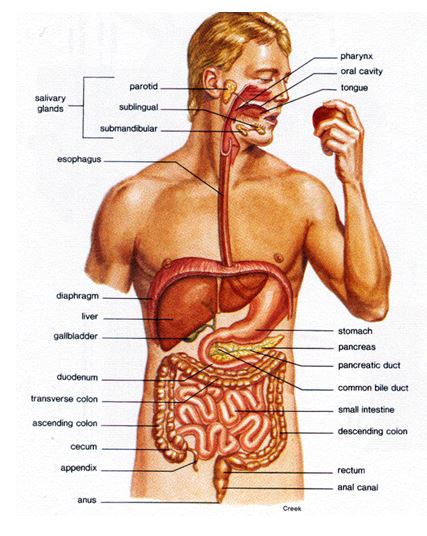 There are two different types of esophageal cancer, each caused by different things.

Squamous cell carcinoma used to be the primary type of EC.  It occurs mainly in the upper part of the esophagus and is usually caused by smoking and heavy drinking.

Adenocarcinoma is now the most common type.  It occurs mainly in the lower part of the esophagus and is caused by GERD, or gastroesophageal reflux disease – aka acid reflux.

Stomach acid and the enzymes the body uses to break down food are kept out of the esophagus by the esophageal sphincter.  But sometimes that can become damaged and doesn’t close properly.  This allows acid to splash up into the esophagus and when that happens, the feeling is what we describe as “heartburn.”

So that’s where I come into the story. 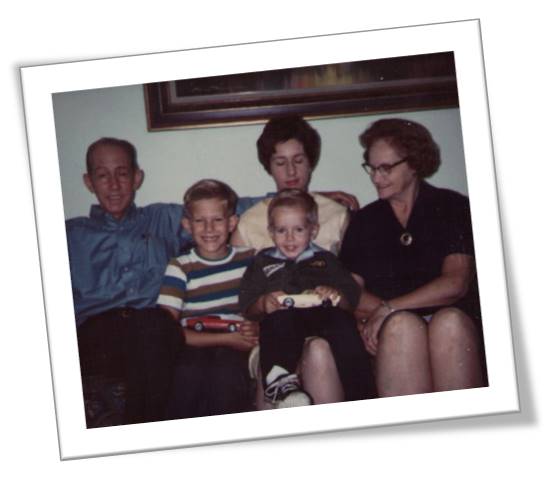 From left to right, my grandpa Dewey, my brother Mike, me on my mother Pauline’s lap, and my grandmother Viola 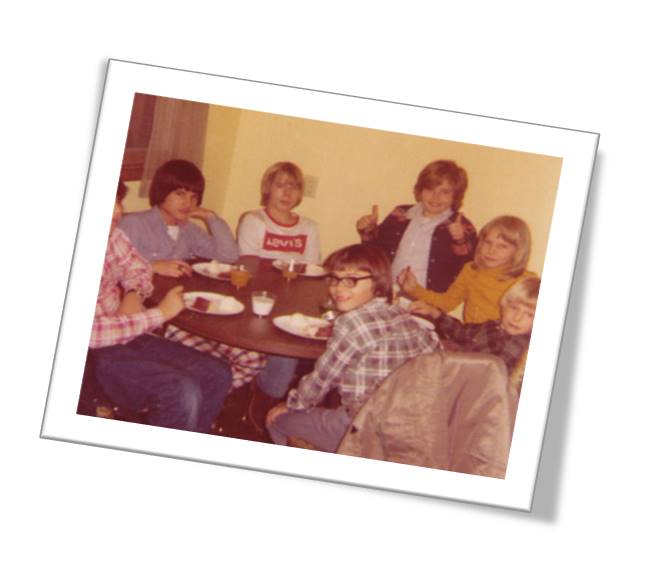 You see the fat girl in the back with the big hair and the brocade jeans jacket giving the thumbs up? Yeah, that’s me.

You know how every school has “the” fat kid?  Well, I wasn’t that kid.  I was the second fattest kid.  But the fattest kid could get you weed, which made him cool, and I was in choir, which adds 15 pounds, so by default I was the fattest kid.

I was what you would call an emotional eater.  I ate when I was happy, I eat when I was sad, I ate when I was angry, I ate when I bored.  (BTW, I still do this, I just can’t eat as much. )  I gained and lost weight more times that Oprah and by my mid-20s, after I had done one crash diet after another, I had developed severe, recurring, persistent heartburn.  It was bad… I often had to sleep sitting up in chairs because it was too painful to lay down.

But this was before acid reflux was a “thing.”  Back then if you had heartburn you took a Tums or a swig of Maalox.  The problem is that antacids are only temporary relief and they don’t actually stop the reflux from occurring.

In 2005, when I was approaching my 40th birthday, I noticed that my heartburn had stopped.  The acid reflux hadn’t stopped – I could still feel it boiling up at times, but it didn’t hurt anymore – I didn’t experience “heartburn.”

I did a bunch of research online and diagnosed myself with a condition called Barrett’s Esophagus. This is an example of how amazing the human body can be.  The esophagus is undergoing what can be almost literally described as an acid attack – acid is being thrown on it frequently.  So it fights back.  The interior lining starts to undergo a cellular change that turns it into tissue that is more like the lining of the intestine, which can handle stomach acid.

The trouble is that sometimes the cells don’t know when to stop changing and it can become uncontrolled.  Uncontrolled cellular growth is what we call cancer.

A gastroenterologist confirmed my self-diagnosis with an upper endoscopy.  This where they put you under and then stick a tube with a camera and some snipping tools down your throat.  It sounds scary but I swear it’s really just a day off work and really good drugs that your insurance pays for.

My Barrett’s was 4-5 centimeters going up from the gastric junction, circumferential (meaning it went around the entire tube).   They took biopsies – 1 per centimeter in 4 quandrants, meaning that I had 16-20 little chunks taken out every time I had to do this.  I always pictured my esophagus as a water wiggle afterwards.

When I was first diagnosed I had some high-grade but mostly low-grade dysplasia.  In 2005, there were some treatments for Barrett’s, but most of them were very new (especially in the United States) and insurance companies usually only paid for them when the Barrett’s had progressed further into the high-grade territory.  This, of course, is ridiculous, but there it is.

In 2011, I got laid off from my job and while I still had COBRA insurance, the out of pocket was simply too much for me to afford with no income.  My gastro-guy said that my last endoscopy in 2010 showed good results and not to worry about it… “Call me when you get a job.”

Well, it took almost a year to get a job.  In 2012 I went back for an endoscopy and that’s when they found that my Barrett’s had flipped to cancer.

Below is a fun (and by fun I mean not fun at all) chart.  It shows is the various stages of EC, how far the cancer has to have spread to be in that stage, what percentage of cases are of that type, and what the 5-year survival rate is for each of those types: 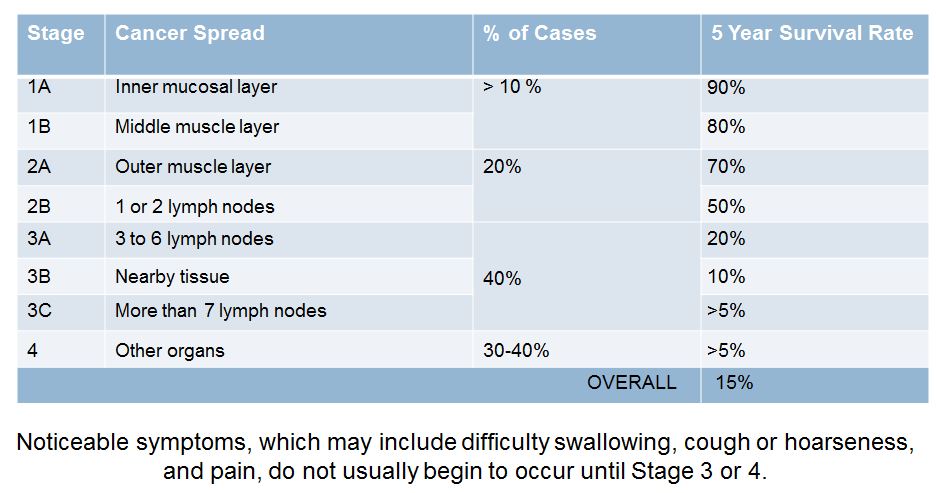 Stages 1 and 2 are relatively rare and relatively survivable.  But unfortunately, most symptoms don’t occur until stages 3 and 4 and by then it is usually too late to do anything about it.

It is worth noting that these statistics vary by source – some studies put stage 1B at 50% five-year survival.  I choose to believe the 80% one.  Why?  Because that’s what I was diagnosed with.

Treatment for stage 1A is what’s called endoscopic mucosal resection, where they use an endoscopy to snip out the cancerous parts.  It can be done outpatient and is no big deal.  Stage 1B can often be treated only with surgery while stage 2 cancers require chemo and radiation followed by surgery.  Stage 3 requires chemo and radiation both before and after surgery.  Stage 4 is palliative care.

The surgery is tough.  It was described to me both as “medieval” (one doctor said “In 20 years we’ll look back and say, ‘We really used to do that?'”) and as the most traumatic surgery that the human body can endure other than open-heart varieties.  First, a general surgeon cuts 8 small incisions in the abdomen and does an exploratory laparoscopy – basically looking around with cameras.  This is to verify the position of the tumor and to double check that there is no other evidence of cancer that had not been detected by diagnostic tests.  If there is cancer spread, they usually stop because putting the patient through the rest of the surgery isn’t worth it.

Then a cardiothoracic surgeon makes a 4 inch incision on the right side of the chest, sometimes removes a rib (as they did with me), and then cuts out the tumor by removing a portion of the esophagus and/or stomach.  My surgery took 5 cm of my esophagus and 4 cm of my stomach.  The remaining stomach is then pulled up and reattached to the what is left of the esophagus.  It looks something like this (in concept – I’m not really a middle-aged woman, no matter what people say): 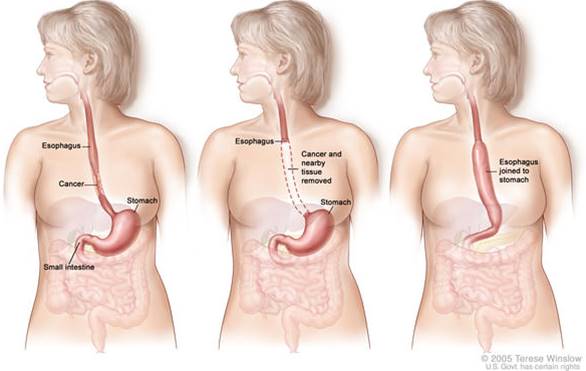 The normal recovery time is about 7 days in the hospital and another 3-4 weeks before you can return to something resembling a regular schedule.

I had a bunch of complications after the surgery, mostly brought on by the fact that I tugged on a feeding tube that had been inserted surgically and tore a hole in my intestine.  By the time they figured out what had happened I was septic and almost died.  I wound up being in the hospital for 2 weeks and it took 4-5 months for me to be something like normal again.

Over those months I lost a lot of weight – nearly 70 pounds – about 25% of my body mass.   Food continues to be a problem for me and maintaining weight is a constant challenge.  I had to have 2 more follow up surgeries and have to go in for tests every 3-4 months to make sure that the cancer has not returned.  I have racked up more than $2 million in medical bills (I don’t have to pay that much, but that’s how much was charged).  This will keep going until we get to the 5-year mark in 2017.

But despite how hard (and expensive) it has been, I still count myself as lucky. I keep remembering this statistic – 18,000 people diagnosed; 15,000 die.

So here are your key takeways… Esophageal cancer is the fastest growing type of cancer in the United States.  It has a high mortality rate but it is survivable if it is diagnosed and treated early.

And this is the big one… if you or someone you know has persistent heartburn (2 or more times per week), go see a doctor.

I really hope you will like, forward, share, Tweet, etc. because I really believe that someday someone who has read this will be at a party or at work or somewhere and someone will say to them, “Man, I have terrible heartburn” and the reply will be “You know, I read this thing about how heartburn is related to cancer…” and it just might save someone’s life.