I have lived in or around the NoHo Arts District for most of the time I have lived in Los Angeles, going on 30 years now.  I lived in this neighborhood back when it was just called North Hollywood, before it got all artsy.  It has had its ups and downs – it was getting really nice in the early 1990s and the 1994 Northridge Earthquake damaged so many buildings and businesses that it took years for it to recover.

For the record, the epicenter of the district (not the earthquake) is around Lankershim & Magnolia, about 2 miles up the street from Universal City.  Here you will find about a couple of dozen small theaters, a bunch of dance studios, a few art galleries, some small indy boutique stores, a couple of restaurants, and a bar or three.  You’ll also find a lot of Thai massage places, medical marijuana dispensaries, and an adult book store just because what good neighborhood doesn’t have one of those?

I have been to many businesses in my neighborhood but usually as destinations – I needed something specific and so I went there and didn’t bother looking around much beyond that.

So today, as we are enjoying insanely beautiful weather (low 80s, light breeze, not a cloud in the sky, I decided to take a walk and really explore.

I headed up Lankershim and first stopped to snap a picture of the god-awful sign they installed a few years back to mark the boundary of the district.  When they first put it up, it was right in between me and work and for about a week I drove several blocks out of my way just so I wouldn’t have to drive underneath it.  I thought it was hideous then and I think it’s hideous now, but you decide: 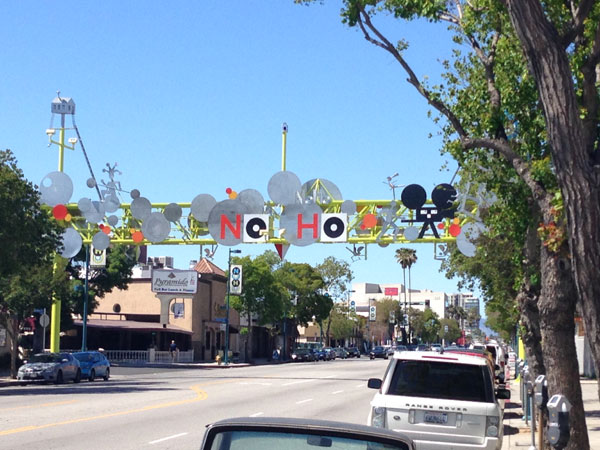 It’s worth noting that the column on the left side of this picture is more or less right in front of the Romantix adult book store.  Stay Klassy NoHo. 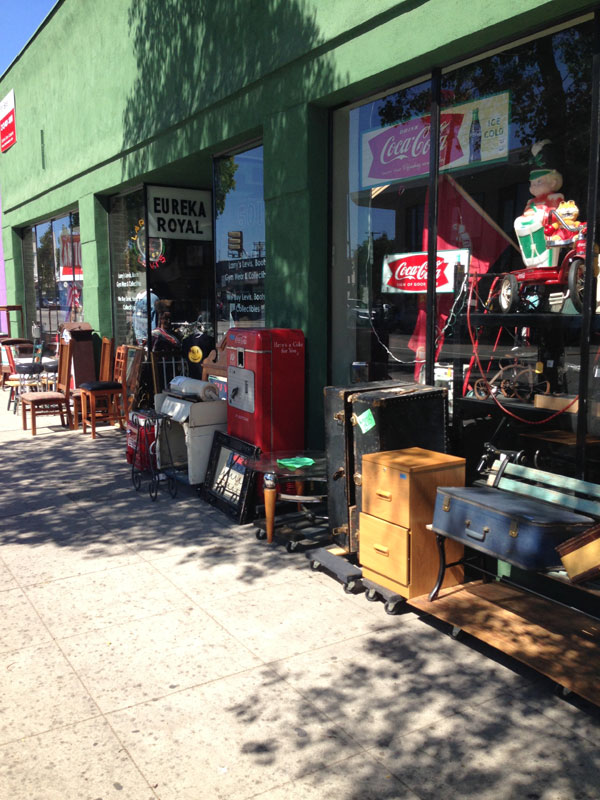 This used to be a sewing machine repair shop and there are still dozens of them left inside but mostly it’s a bunch of stuff – furniture, suitcases, bric a brac, movies, typewriters, pictures and paintings, and on and on.  Some of it was actually really cool and if I designing a room and was looking for some fun conversation pieces, I’d come here.  Problem is that most of it was kind of crazy expensive, although my guess is that Larry would probably be amenable to haggling.

I picked up a simple cigar box that I thought was kind of cool: 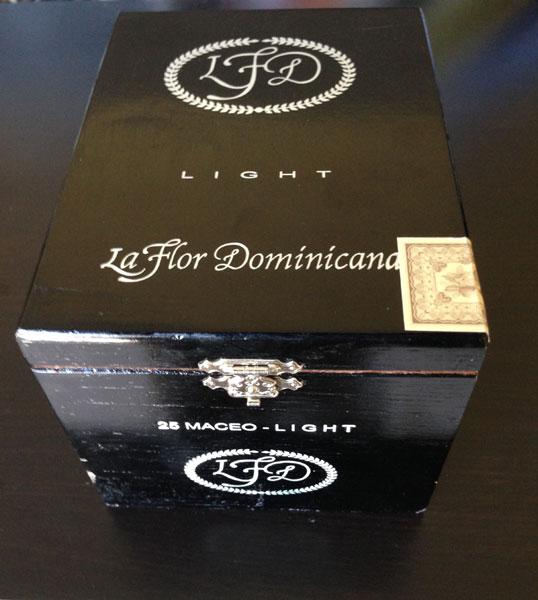 Next I stopped at the Gallery 800, a small art gallery that was installing a show of watercolors.  Not exactly my favorite genre of art, but some of them were nice.  I primarily just wanted to get a look inside the building, which I have always coveted. 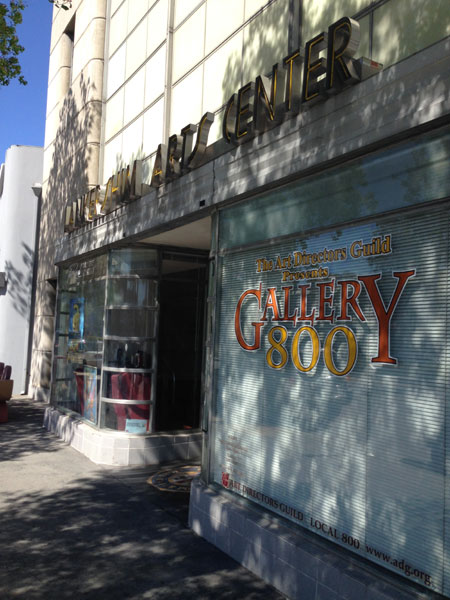 It was built in 1939 as the Department of Water and Power building and has this really cool art deco flair to it.  I used to dream about buying this building some day and turning it into a cool work space, but I’m happy that it has a good use these days as the gallery and a theater.

Next I went on up to the Republic of Pie, a small restaurant/coffee shop on Magnolia.  I had eaten here once before and didn’t like it much, however it was not too long after my big surgery – I remember I was still walking with a cane – and pretty much all food tasted like sawdust at the time.  So I gave it another try and I was very pleased with the slice of apple pie I got.  Maybe not the best I have ever eaten, but darned good. 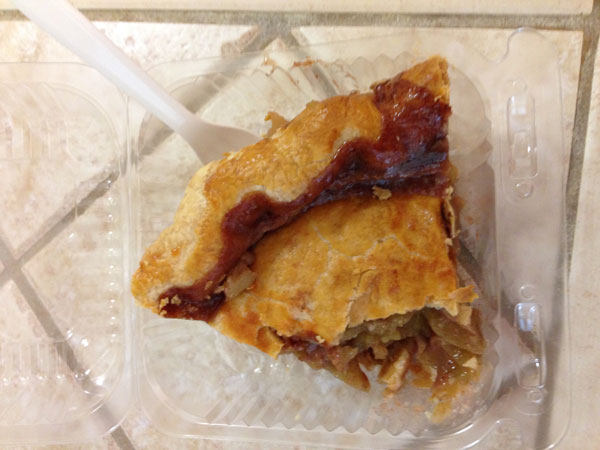 Of course as the neighborhood continues to get nicer, so do the residences around it.  I stopped at a new apartment complex that opened recently just off of Lankershim, just for grins since they were having an open house.  They even had a guy on Lankershim twirling one of those arrow signs to lure people to stop by.

All around the place were signs that had photos of young, gorgeous, hipster twenty-somethings apparently enjoying life inside this new apartment complex.  The promise seemed to be that if you lived here, you would be as fulfilled and cool as these people and if you didn’t, you were an old, fat, loser.  I went inside and there were individual concierge desks and behind one was a guy wearing a finely tailored suit who looked like he was probably on a soap opera during the week.  He looked at me in my ratty khaki shorts and t-shirt and ball cap with a bit of disdain and said, “May I help you?”

“Oh, I’d like to,” he said, sounding a bit like that receptionist character David Spade used to play on SNL, “But I’ve got somebody coming in shortly and I’m pretty booked up for the rest of the day.  Maybe I could squeeze you in sometime next week?”

I often have to review nightclubs in Las Vegas and they almost always have people like this at the door – officious pricks whose job it is to find the hottest people in line and to leave everyone else waiting behind the velvet ropes.  It makes me mad there and it made me mad here, because while I can’t prove it, I’d be willing to bet you that if I was in this apartment building’s desired demographic, I would’ve been on a tour in no time.

“If you can’t show the apartments, why do you have a guy out on the street with a big sign trying to get people to stop?” I asked.  “And why do you have balloons and signs that say ‘Open House’ outside?”

“Oh we always have that,” the guy said, as if that made it make any sense.

I was going to take out my aggression on him but my apple pie was calling to me so I just left instead.

BTW, I looked up the building online… they have an onsite recording studio, a “writer’s cafe” with an espresso bar, a lounge with pool tables and 3-D TVs, and an infinity pool.  The cheapest apartment they have is a 545 square-foot studio going for $2,220.

The thing that makes me laugh about that is that most of the young, hot, hipster types they are trying to get in this building couldn’t possibly afford it, whereas me, with my ratty khakis and baseball cap, totally could.

I wouldn’t, but I could.

So that’s my neighborhood.  Welcome to it.