Back on Day 119, my Differently for the day was making arrangements to go to my 30 year high school class reunion.  I went a few weeks ago and thought I would use that to kick off a travel series of Differentlies as I head off to Las Vegas, Atlanta, and Savannah, Georgia for my birthday vacation.

But they got me here more or less on time on Friday but then I got waylaid by an epic wait for my suitcase.  Seriously, there are six gates at the Eastern Iowa airport – the plane was like 27 feet from the baggage carousel and it took almost 30 minutes between the time we got to the gate and the time the bags arrived.

The driving excitement Enterprise was going to give me was not at all exciting – is there anything in the world more boring than a 2013 Chevy Impala? – so I upgraded to a sparkly new GMC Acadia with all sorts of bells and whistles and, it turns out, an epic thirst for gasoline.  Sorry Earth.

Driving in from the airport I played the “that used to be…” and “I remember when we went there and…” game all the way to my hotel.

Cedar Rapids is a nice little city but it really has very little in the way of Midwestern charm except for, perhaps, in the people.  This is not Mayberry or Stars Hollow – there is no cute town square or bustling historic section.   The Downtown area is still trying to come back from a really devastating flood in 2008 but even before that it wasn’t really a destination.  Instead, what you get with Cedar Rapids is chain heaven.  Chain restaurants, chain stores, chain hotels… when I tried to find the best restaurants in town online, things like Olive Garden came back in the search results.

Don’t get me wrong – I’m happy I grew up here and I’m sure that’s it’s probably still a great place in which to grow up and then live here if a quiet Midwest thing is what you’re after, but I wouldn’t put it too high on my list of vacation spots unless you want to buy your souvenirs at Target.

On my way in I stopped at the Maid-Rite for one of their famous loose meat sandwiches.  I still have a hard time explaining why this simple thing – ground beef on a bun – is so heavenly to me, but it is.  I’m sure it has to do with childhood memories, but I just can’t get enough of them.  I swear if I had the money, I’d open one in LA.  They are a chain, but primarily in the Midwest.

(more story after the blurry photo) 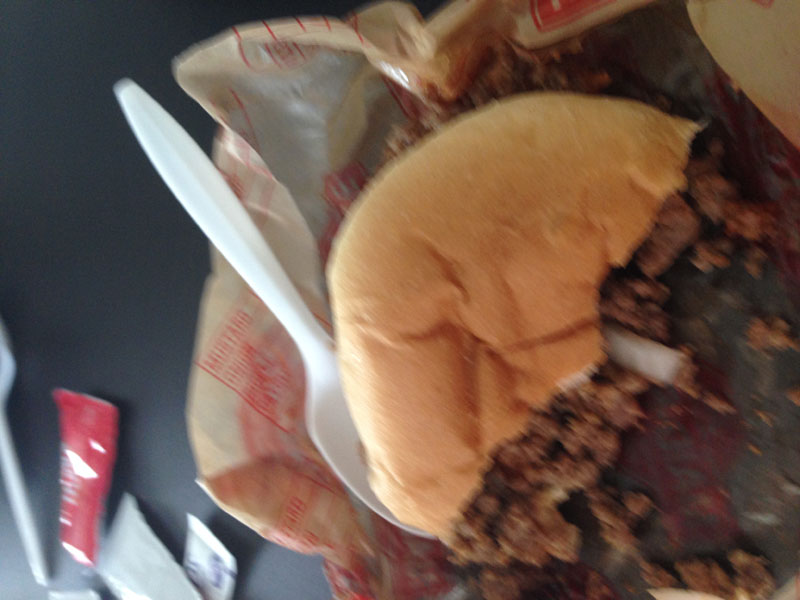 Then it was off to the Homewood Suites by Hilton (chain), which is nicer than I expected it to be – it’s only one room so not exactly a suite, but it’s big, the furnishing are well-kept, there’s a full kitchen, and they have a free breakfast every morning.  I have gotten used to Las Vegas hotel rooms and so sometimes ones that aren’t sumptuous palaces with bathrooms big enough to park a plane in seem underwhelming.   It’s good for me to stay in “normal” hotels because this is what most people are used to and why Vegas hotel rooms are often so impressive.

I went to dinner with old friends Karla, Dawn, and Patty and by dinner I mostly mean drinking.

Then the first official event was at a bar called the Field House – basically a sports bar with lots and lots of Iowa Hawkeye paraphernalia, most of which I didn’t understand because sports?  No.

I have to admit I wasn’t terribly excited to go to the reunion.  As I have mentioned I didn’t have the best high school experience, but I wound up having a really nice time.  It was great to catch up with people that I wanted to see like the aforementioned folks and Tasha, plus people that I didn’t know that I wanted to see but had a great time talking to.  Below is a photo of Patty, myself, and Tasha – the three of us went to our Senior Prom together and I still think they are two of the best people on the face of the planet.

(more story beneath the photo) 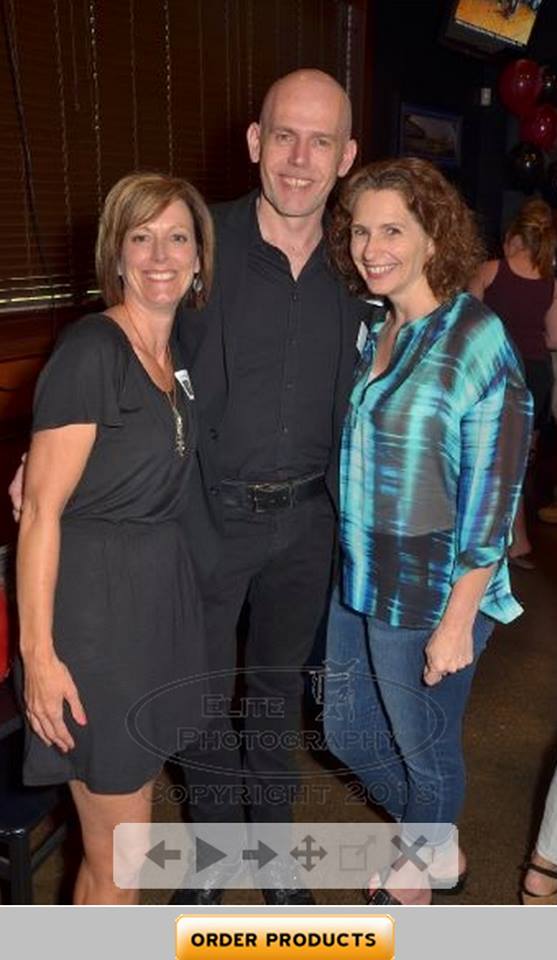 When the reunion was winding down, Patty and Karla and I decided to head over to the Tic Toc Lounge, a dive of a place that had been a semi-regular haunt when we were in high school, not because of the ambiance but mostly because they would serve kids in high school.  I know, bad… shameful… whatever.

It was closing just as we got there and then Karla decided to pack in for the night but Patty and I soldiered on and wound up at the one gay bar in Cedar Rapids, Basix, which is in a former McDonald’s.  No, really.  They were having a drag show.  Interesting.

The next morning I met up with another friend from back in the day, Brenda, who wasn’t in our grade but was in town for a wedding and staying in the same hotel as me.  She crashed a tour of the high school, which started with the huge football stadium and aquatic center (neither of which existed 30 years ago) and then through the school itself.  There were ghosts of its former self but it was so different that I didn’t have any major flashbacks except for when I stepped into the old auditorium. Between choir and all of the plays I was in (yeah, I was that kid), I spent a ridiculous amount of time in that room and it gave me a bit of a tug in the brain and the heart.

There’s more after the photo of the new Linn-Mar logo, which gave me a great deal of enjoyment because I have now decided the official team name will be the Flaming Lions. 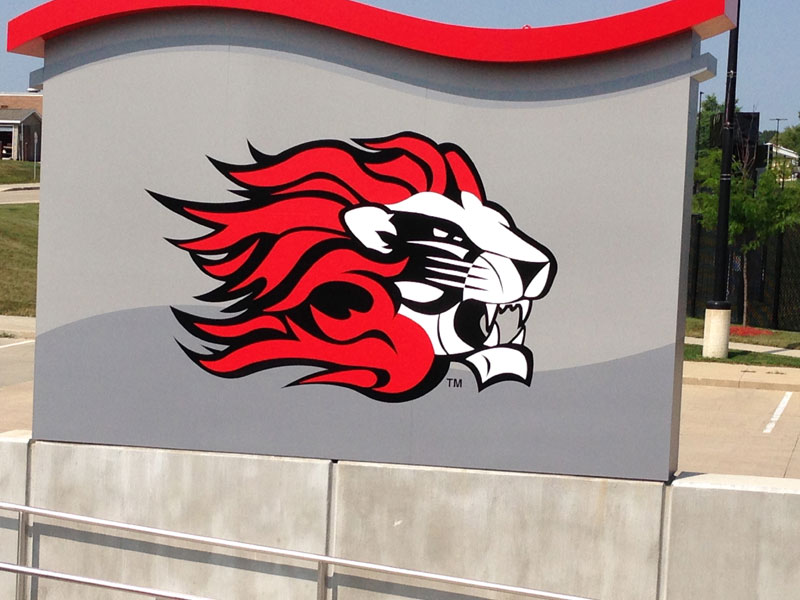 For lunch it was back to the Maid-Rite with Brenda and Karla and more meaty goodness.

That afternoon I drove down to the Riverside Casino about 45 miles south of Cedar Rapids.  Nice place.  Didn’t win jack.

Back up in town I met Patty and another Class of ’84 alum Kristy at the Tic Toc to finally satisfy that particular craving.  I remember we used to get Tom Collins by the pitcher and that they had great hamburgers so I ordered both and was sneered at by the waitress who couldn’t believe I was ordering a Tom Collins in a place like that.  The burger was so-so.  You really can’t go home again, can you?

(more after the photo) 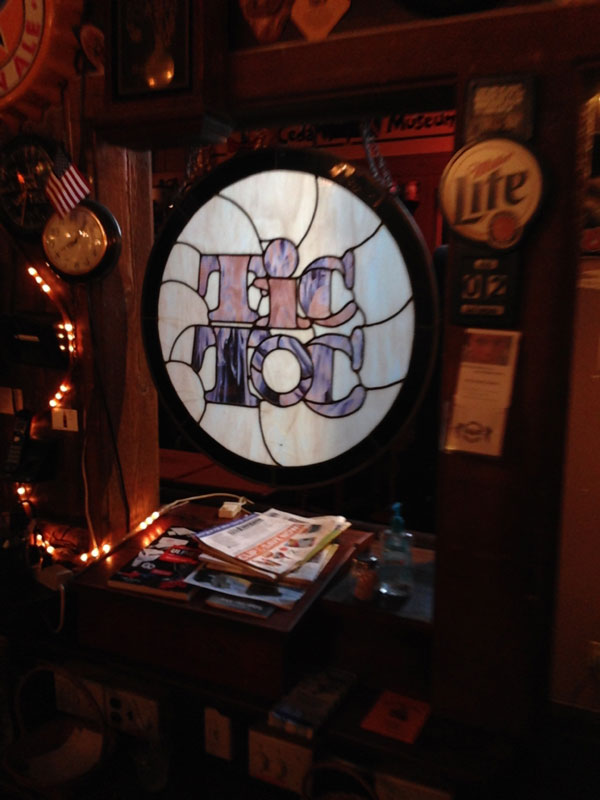 After that was more drinking at another bar, Cocktails & Co., for the last of the official reunion events.  It was mostly the same folks as the first night but a few new faces and more great conversation with the ones I had talked to the night before.

Two observations… First, I was pleasantly surprised to find so many kindred spirits from a social and political perspective.  I’m often far too liberal for my own good but there were lots of folks there that had similar, if not even further left, views, which is not something you expect to get in a place like Cedar Rapids, Iowa.

Second, it was interesting to hear people’s stories about their experiences in high school that I had no idea about and then to share mine, which most people didn’t know about.  I hid my unhappiness fairly well, I guess.  But it sort of pointed out that everybody had “a thing,” you know?  Whether it was bullying or a rough home life or insecurity or pressure to achieve or whatever… everyone had something they were contending with that they, for the most part, kept hidden.  Fascinating.

The next day I embarked on a mini-Plucky Survivors style adventure across Iowa.

I started at the Amana Colonies, a Mennonite community about 25 miles southeast of town.  It’s got all sorts of throwback shops and restaurants with hand crafted and hand made and locally grown and the like.  I got some fudge, which made me happy.   My family used to go here a lot when I was a kid for special occasion Sunday brunches at a place called the Ox Yoke Inn so I tried to recreate that but the wait for the main dining room was an hour long.  Instead I went down into the bar where they had a limited menu but it wound up being heaven on earth.

I now have a favorite sandwich… the Bavari-Inn.  Hold onto something… it’s slow roasted prime rib… on top of smoked ham… topped with grilled onions, Swiss cheese, and horseradish.  Holy mother of God, this was a religious experience, no lie.  The Maid-Rite will always hold a special place in my heart, but this is now the winner in the best sandwich ever derby as far as I’m concerned. 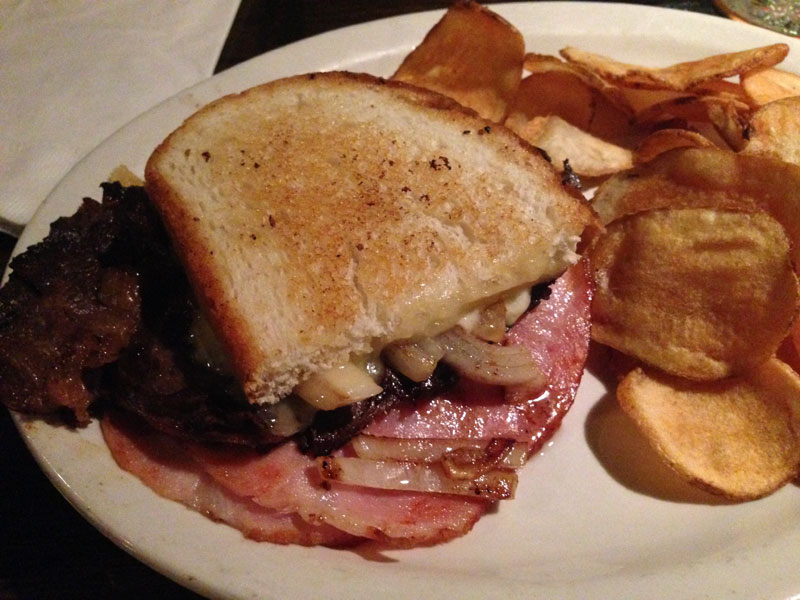 On the way out of the Colonies, I snapped a photo of the sign going into tiny Homestead, Iowa.  Why?  Because the TV movie I wrote that will hopefully get made some day takes place in a fictional version of Homestead, Iowa.  It’ll be nice to have this then.

(more after the photo) 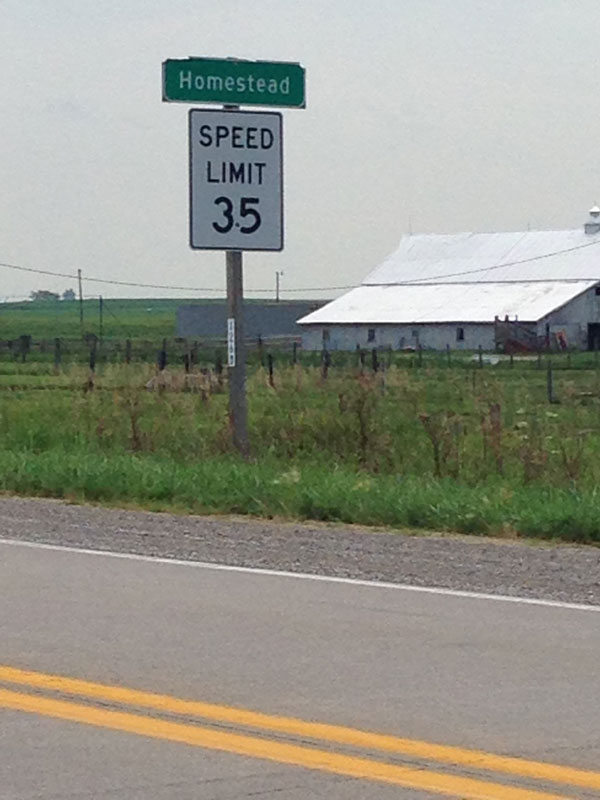 From there it was across eastern Iowa about 100 miles to the microscopic town of Gladbrook, Iowa to visit the Matchstick Marvels Museum.  It’s the place where a guy named Patrick Acton keeps some of his most awe-inspiring matchstick creations – everything from buildings to ships to the space shuttle and beyond.  Take a look at some of the examples… 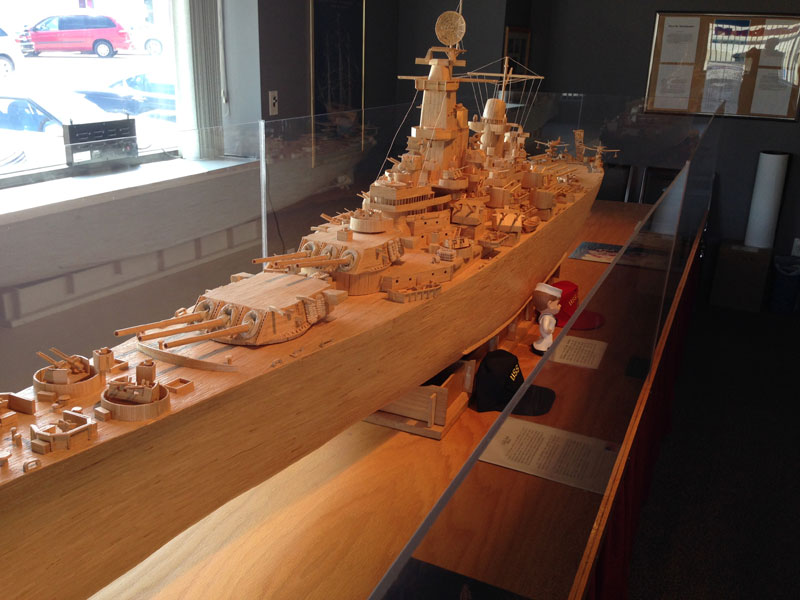 You sunk my battleship! 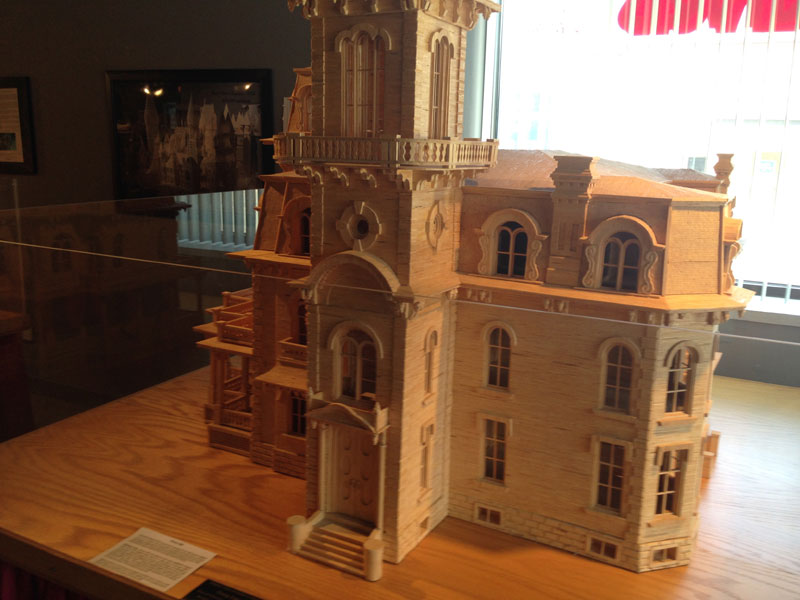 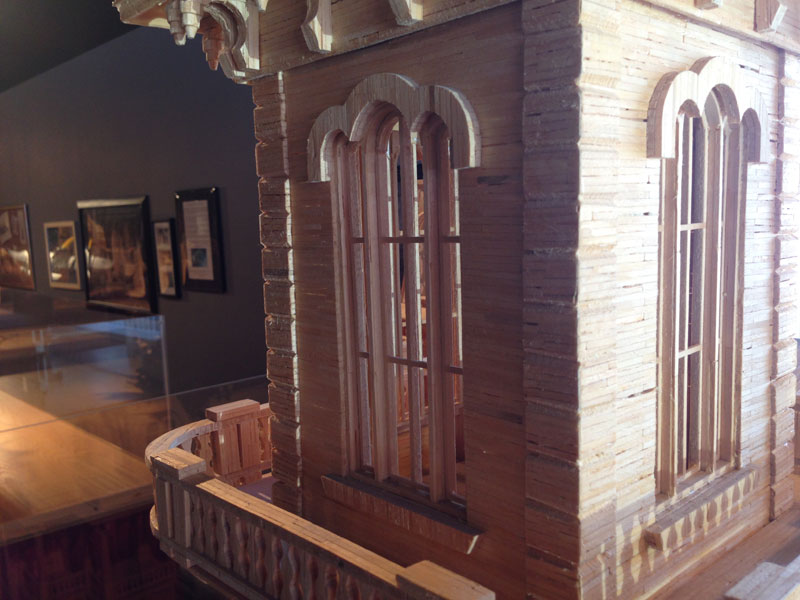 The incredible detail on the mansion. 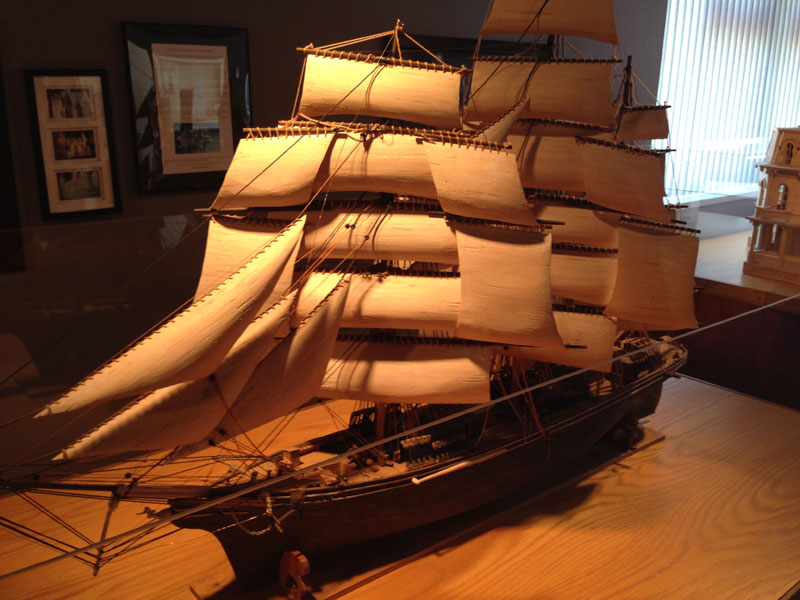 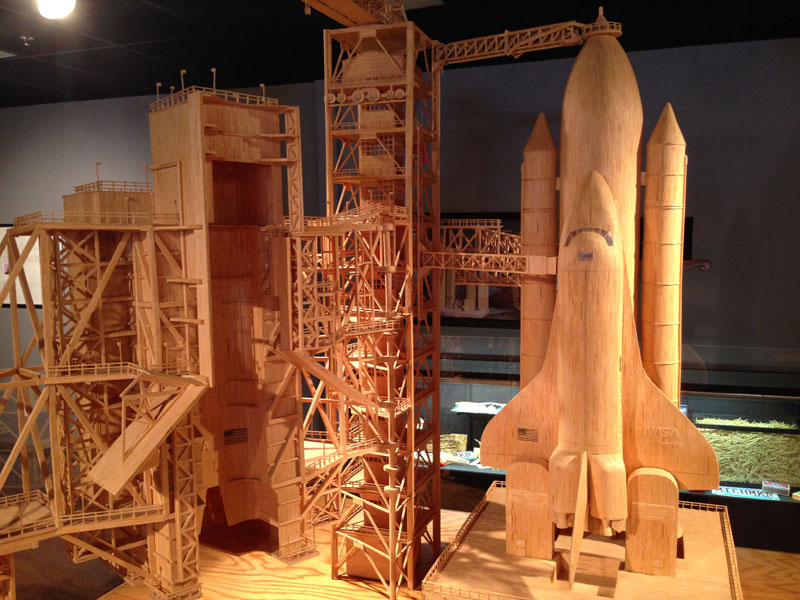 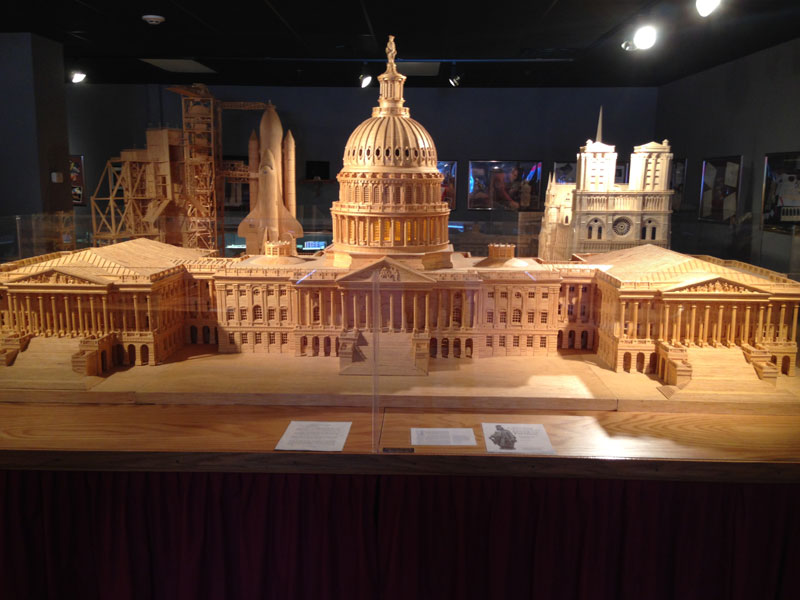 The US Capitol Building.

Then it was off to another casino (see above) and then back to Cedar Rapids where I tried a BBQ joint that had been recommended online and seriously disappointed.  Not even worth discussing.

So Iowa was a success and a lot of that has to do with the people that I got to see, many of whom have elected me to plan the 35 year reunion, which they think should be in Las Vegas.  We’ll see.

In the meantime, I end this post with a quintessentially Iowa photo that I snapped on my trek across the state. 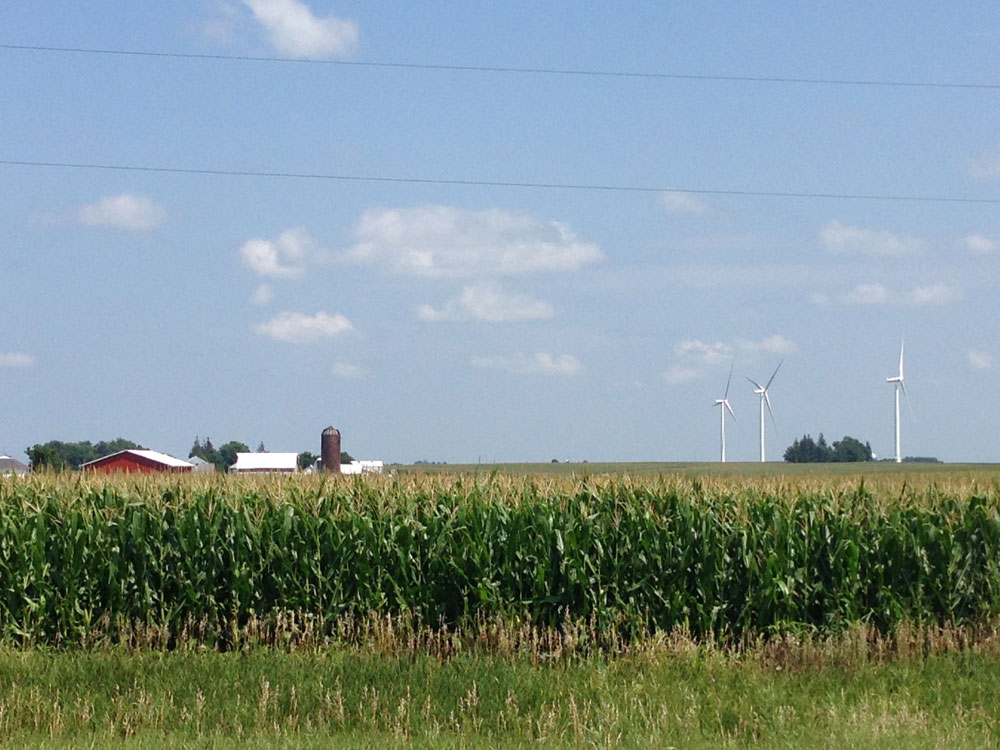