Would You Look at the Time!

It seems like just yesterday I was complaining about how long I had to wait before I could get my next set of tests – you know, the ones that would (in theory) tell me if I’m living or dying. There’s no way I could wait until June, I thought. That seemed entirely too far away for something as big as that.

But then I went and blinked and look at that… it’s June, already. As Kathy Najimy says in one of my all-time favorite comedy sketches, “Time is rocketing.”

I feel that lately; time, rocketing. I don’t know if it’s because I was so keenly aware of this metaphorical clock, loudly ticking down to the thumbs up or thumbs down verdict that will come with this set of tests, or if it’s just the inevitable thing that happens when you get older. Time seems to go by more quickly than it should or at least ever did when we were younger. How could it possibly be June already? How is it even conceivable that we are halfway through 2013 already? Who could possibly imagine that I am 46 years old, facing the possibility that I won’t make it very far into 47. Weird.

And if I do make it into 47, it’ll be time for my 30 year high school reunion next year. Weird again some more.

This came up during my recent trip to Chicago, or rather a side trip I took to Dubuque to see a friend from childhood, Patty. Patty and I knew each other mainly from choir and various plays we did together like the musical version of “Some Like it Hot” called “Sugar.” She played bandleader Sweet Sue while I failed miserably in my one attempt at drag with the Tony Curtis role of Joe. And while there were video cameras and an appearance on the local morning show in 1983, no, there are no videos of it on YouTube – I checked. 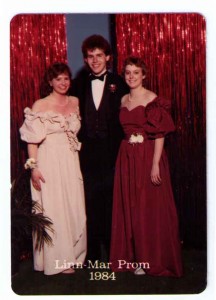 Sometime after bowling but before the farm.

The photo gives me pause as many from this era do. With that much hair – more than either of my dates, it should be noted – how could anyone not have known I was gay? Including myself!

During my go ‘round with cancer last year, Patty stepped up in a way that moved me, sending a steady stream of laugh-out-loud cards and gifts to keep me amused. When I complained on this very forum about not being able to eat pizza anymore, she sent me a pizza shaped Christmas tree ornament.

I met her at the Dubuque Maid-Rite shop and had one of my favorite sandwiches from childhood – still just as good as I remembered – and then the two of us went to the charming little town of Galena to watch a friend of hers play ukulele in this offbeat little bar. We joked and laughed and did remarkably little reliving of old times, thankfully. I don’t have the fondest memories of childhood so I’m perfectly content not to rehash it.

One the way over there, I engaged in some other reminiscing as I played out some bits and pieces of my Plucky Survivors adventures with Mary. I counted cows of course (she would’ve won) and even took an unscheduled side trip when I saw a sign for the Woodbine, Illinois Glass Museum. It was a building that wasn’t much bigger than a converted two car garage (which may in fact have been what it was at some point in its life) with a gift shop and a one room “museum” filled with all manner of glass vases, bottles, sculptures, jewelry, doohickeys, doodads, and more. The story, as told to me by the jovial older gentlemen that got up out of his recliner to give me a tour, was that his wife had started collecting glass trinkets decades ago and it had grown to this, with thousands of pieces from around the world.

It was the perfect Plucky Survivors roadside attraction – an even blend of silly charm and breathtaking beauty. I mean, it’s a garage full of glass but some of it was so intricately, artistically created that it almost hurt your heart to look at them.

Friends (both real and imagined), a Maid-rite, a ukulele concert, and a roadside glass museum. Perfect days like that don’t come along very often, I have to say.

But the point I was getting at was the whole passage of time thing. Both Patty and I don’t think it’s possible that next year will mark 30 years since we graduated from high school. I can’t figure out how more than three years have gone by since Mary died. And I certainly can’t believe that it’s June already and now I have to go get a little test done.

That test – the PET scan – is scheduled for this Thursday, by the way; results by next Monday. In theory, one of two things will happen. If the spots that were there in the last PET scan either aren’t there anymore or haven’t changed since that scan, then I don’t have cancer. What is causing the spots will still be a mystery but if they haven’t gotten any bigger or spread any further then it isn’t cancer. I’ll probably have a biopsy of the cyst-like object on my back to be sure and will probably go in to see Gastro-Guy to try to figure out the abdominal pain I am having, but cancer should be off the menu at that point.

If the spots have gotten bigger or there are more of them, then it is cancer. And not just cancer but stage 3 or 4 metastatic esophageal cancer, which has roughly the same chances of survival as those given to people who fall into industrial meat grinders.

I really don’t think that’s going to be the case. As I have been stating for quite some time now, I think something is wrong but I don’t think it’s terminal cancer. I don’t feel good, by any stretch of the imagination, and I don’t know what terminal cancer feels like, specifically, but I don’t think it’s this. My guess is that Dr. Wile E Coyote will give me a passing grade on the cancer part but it may not end the “What’s Wrong with Rick” poking and prodding.

But if I’m wrong… well, let’s not go there quite yet. Let’s watch Kathy Najimy instead, shall we?