Asterisk II: Revenge of the Asterisk

The short version: it’s most likely stage 1B but there is some activity in the lymph nodes near the tumor that while not specifically cancerous are enough to put an asterisk on the 1B.

If you haven’t read the post about the different stages of esophageal cancer, you may want to do that but the short version of that is: stage 1 is bad but fixable; everything else is just plain old bad.

Now, the longer version… It’s been an interesting day.  I was wide awake by 6am and spent the next nine hours before I was to go in and get the results of my PET scan going back and forth between a shrugging Zen like state and almost paralyzing anxiety.  On the one hand, there is absolutely nothing I could do to influence the results so getting stressed out about it seemed like a waste of energy but on the other hand, “AIIIGGHHH!!!!!!! I HAVE CANCER!!!!!! I’M GOING TO DIE!!!!!!!!!!!!!!”

So yeah, it was a bit of a roller coaster day emotionally.  Luckily I had lots of work to do but unfortunately a lot of it involved documenting my job so that someone else could do it, either temporarily or…. “AIIGH!!!!”

I went in to see Dr. Wile E. Coyote, Super Genius and was ushered in almost immediately even though I was a solid 25 minutes early for my appointment.  That concerned me.  Then I got even more concerned when I overheard the nurse calling the scanning place to ask them if they had the results of the tests in yet.  As much as I was worried about what the results were going to be (“AAIIGH!”), I absolutely, positively could not take another day (another hour, another minute) of the waiting so the idea that they hadn’t gotten the report was anxiety provoking for a completely different reason.

But then Dr. Wile E. Coyote, Super Genius came in and handed me a copy of the report.  Before he could speak I stopped him.  I pulled a bag of mint M&M’s out of my pocket and said, “Whatever it is you’re about to tell me, I believe it will require chocolate.”  He appreciated that and asked for some.  Have I mentioned how much I like this doctor?

Then he cut to the chase with a simple statement:  “I have good news.”

Now, “good” in this case is decidedly relative, which is to say, I have cancer most certainly but there is “no evidence of metastatic disease and no metabolically active lymph nodes.”  What that means is that the cancer is stage 1B, invasive to the lining of the esophagus but it has gone no further*.

Yes, there’s an asterisk, but a different one than the first one.

It could also be that the cancer has started to invade the lymph nodes but hasn’t gained enough territory to show up as “metabolically active” (aka: cancer) on the PET scan.  The fact that the lymph nodes that are reactive are the ones nearest to the tumor and that the ones in other places (for instance closer to the infection in my head) are fine is enough to give one pause, but pause for only a minute because now it’s time to get serious about this crap.

Surgery is officially a “go” and there will be no chemotherapy or radiation beforehand.  I am meeting with the cardiothoracic surgeon next Tuesday the 31st and then he and Dr. Frenchy will coordinate schedules and figure out when they can tag team to Julienne my innards.  I’m guessing that the earliest this will happen is probably the week of August 13th.

When Dr. Frenchy takes out the offending portion of the esophagus and stomach, he will also remove those asterisk inducing lymph nodes nearby and they will be biopsied.  If there is some cancerous activity in them, then it’ll get more interesting again with talk of chemo and radiation but we’ll burn that bridge when we get to it.

It’s kind of ridiculous that I am relieved by the news today.  I mean, after all, I still have to go have portions of my body ripped out in a really awful, dangerous, and life-changing surgery but compared to the alternative (“AIIIGH!”), it seems like less of a big deal than it did when I first got the news.

Now, I’m certain that between now and the surgery, my “relief” will give way to “AIIGH!” again but for now I’m going to take whatever ground I can capture in this particular land war. 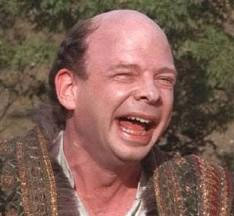 “You fell victim to one of the classic blunders. The most famous is ‘Never get involved in a land war in Asia,’ but only slightly less well known is this: ‘Never go in against a Sicilian when death is on the line.'”
Just popped into my head. Had to be done.

One more note which gives more evidence as to why I like Dr. Wile E Coyote, Super Genius so much.  At the end of our meeting he shook my hand firmly and said, “Congratulations” and then told me about this chocolate drink at Starbucks he was addicted to.  I said I didn’t need to know about something else chocolate – I consume too much of it as it is.

“No, you have to gain weight before your surgery!” he said.

“Really,” I said looking down at myself, “I think I need to lose weight.”

“You’re going to lose weight after the surgery,” he said, “Before, go crazy.”

So I stopped on the way home and got a double cheeseburger and fries with ranch dressing from Rick’s Drive In in Silver Lake.  I’m going to check out the Starbucks chocolate drink thing tomorrow.

My doctor told me to!