About a week until the scheduled surgery and now less than a week for me to proverbially shit or get off the proverbial pot, proverbially speaking.  I will need to make my decision by no later than Tuesday evening because that is when I will have my last meal.  It’s not literally my last meal – I’ll be able to eat after I recover from the surgery, but I won’t be able to eat very much that is interesting that’s for sure.  So let’s call this my last GOOD meal.

That’s a lot of pressure to put on one meal.  I’ve been putting a lot of thought into it – perhaps entirely too much thought – but what I keep coming back to is Fatburger.  I love me some Fatburger and it fulfills a lot of the criteria that a last GOOD meal should satisfy.  It should be insanely caloric and very, very bad for you; there should be little, if any, redeeming nutritional value to it; and if all possible, the word FAT should be in the title.  But I still have time to decide so if anyone has a better idea, please feel free to let me know.

Anyway, there is more paperwork to fill out and, since this is a hospital, an actual admissions process to go through.  After a short stay in the admissions waiting room (more of an admissions wide spot in the lobby where they stuck a few chairs), I was pulled into a depressingly bland little room with a depressingly bland little man who did not smile at any of my attempts at humor.  In fact, no matter how hard I tried I could not get him to deviate from his prepared script.

“My name is Walter.  I will assist you with your admissions forms today.  I will make a copy of your government issued identification and your health insurance card.  In a moment, I will have copies of the paperwork for your records.”  I kept waiting for him to start talking about his time as the 16th President of the United States. 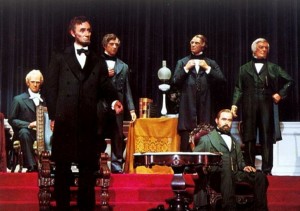 Yes, I just made a Disneyland Hall of Presidents joke. Booyah!

Walter computed that his work with me was complete so he disconnected himself from his port and went wireless so he could show me where the next waiting room I needed to park myself in was located.

Waiting room #2 was big and airy, with lots of windows overlooking a nice courtyard, today’s newspapers and very current magazines, and a TV playing some sporting games happening in some other country.  The problem with this one was that a lot of the chairs faced each other and there were a lot of people waiting.  Unlike most of the other waiting rooms, this one was at a cancer hospital so you knew that the odds were that most people in the room had cancer or might have cancer or were recovering from cancer.  You’d think this would have created some sort of solidarity but instead what I saw was almost competitive in nature – sly looks as people tried to gauge who was sicker than whom and what type of cancer the person sitting across from you might have.  I could almost hear the game…  Breast 42; Gall Bladder 14; Ovarian 23.  BINGO!

Or maybe it was just me.

My appointment was with an oncologist that we will be calling Dr. Not Fucking Around.  Although she was very nice and tolerated my nervous flapping about with aplomb, she was definitely of the “Conversations are meant to relay information between two people in the most efficient manner possible” type.  Simply put, there was no chatting about it being 172 billion degrees outside or anything else that wasn’t germane to topic at hand.  She wasn’t quite the animatronic Lincoln that Walter was, so I decided to just roll with it.

For the most part, Dr. Not Fucking Around told me what I already knew, which is that surgery was not only my best chance for a cure, it was pretty much my only chance for a cure.  It’s a terrible surgery with life-altering implications, but the other options – a less invasive procedure, chemo or radiation only – were not going to cut it.  They might delay it, but they wouldn’t fix it.

I boiled it down: “So what you’re saying is that if I remove the emotional component of it and stop being such a big, whiny, terrified baby about things, it would be clear that surgery is the only choice here?”

“You’re not being a baby,” she said.  I decided that mean she DID think I was being whiny.  And big.  I think she just called me fat.

The one thing she did stress that is kind of stressing me out is that I should have my surgery done by people who do this kind of surgery all the time and not by people who do it sometimes.  I get that, but at the same time I also feel as though my regular doctors, whom I trust, are all saying that Dr. Frenchy and Dr. James Earl Jones are fantastic surgeons who have the skills necessary to do what needs to be done.  So do I go with known quantities (even if they are known in a two-degrees of separation way) or do I go with people who have better resumes?  I’m inclined to stick with what I’ve got for a few reasons.  First, my regular doctors wouldn’t be able to be involved if I go to a different hospital and I need that kind of stability and second, if I were to cancel now I’d have to start all over and that could mean many, many more weeks of this soul-crushing, brain-busting anxiety before I could get this over with.

But regardless, Dr. Not Fucking Around is referring me to a surgeon at USC who does these procedures all the time and also wanted to give me referrals to former patients who have had the surgery, which I thought was very nice.  I don’t know that I will act upon those referrals but we’ll see.

So that’s it on the cancer front until Monday when I have my pre-operative physical with my regular doctor and my second second opinion with a gastroenterology specialist at UCLA.

BTW – to everyone who has commented, e-mailed, or just thought good thoughts, thank you.  Those who know me well know that I don’t ask for help easily but in this particular instance I can use all of it that I can get.