A donut is what I was craving after my PET scan.  You see, apparently this cutting-edge test that costs thousands of dollars, involves multi-million dollar machinery, radioactive isotopes, and advanced training to administer can be thrown off by a chocolate chip cookie or a baked potato.  Therefore, in advance of it, you are not allowed sugar, candy, alcohol, coffee, tea, milk (including non-dairy milk), soft cheeses, pasta, starchy vegetables, rice, bread of any kind… carbs in general are a big no-no.  The instructions also specifically call out gum and breath mints; even sugar-free.  Odd.

Anyway, a day without sugar for me is like a day without oxygen so by the time the test rolled around I was a bit cranky.  Granted, some of the cranky could have had something to do with the life and death nature of the test I was getting, but in my case it was probably just the sugar DTs.

In a previous post I was talking about waiting rooms and the one at the scanning center was definitely worth talking about.  It was furnished with items that I am convinced Liberace would have dismissed as being too over-the-top. Red walls, marble floors, black leatherette couches, gold-leaf trimmed chairs with animal print upholstery… Add a white tiger and it could’ve been Siegfried & Roy’s house. 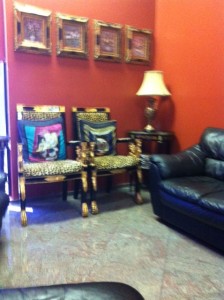 Sorry for the blurry. I didn’t think the staff would be happy about me taking a picture of their waiting room so I could make fun of it later.

Questionable decor aside, the facility was just fine and the staff could not have been nicer, especially Jake.  That’s not his real name but it’s what I’ve decided his name should be because Jake is the name I always assign to the guys who are my boyfriend even if they don’t know they are my boyfriend.  Is it wrong that I developed a crush on the guy giving me a PET scan?  I mean after all, it has the word “pet” in it.  Thank you, good night!  Tip your waitresses and drive carefully!

But I digress.  After more of the annoying thing about cancer #37, Jake took me into an intimate little candle lit room… or maybe that part was just in my mind.  He explained the test (which can best be summed up as “tedious”), set up a butterfly needle line, gave me a little saline, and then injected the isotope.

“Neat,” I thought.  “I hope I get superpowers but more interesting ones than that whole web thing that SpiderMan has going on.”

Jake stepped out and I noticed a box sitting on the table that was labeled something like “Scanning Blood Test Set” and then underneath that a translation into German, which was something like “Schedenmachenhoistentestsetstein.”  While I’m making up the letters, the length of it I am completely serious about.  When Jake came back in the room I said, “Scanning Blood Test Set” is one word in German?

“There’s a surprising amount of German in this job,” he said with the utmost of seriousness.  I thought that warranted some follow up questions, perhaps over drinks later, but in the meantime it was off to the “quiet room” for me.

After becoming radioactive, you must lie quiet and still for about an hour.  No excessive movement, no reading, no talking, no checking e-mail or playing games on the phone – just lie there.  Because again, the incredibly sophisticated test could get thrown off by a spirited round of Angry Birds.

There was too much light and people and noise for me to be able to nap, especially since sleep isn’t exactly my strong suit these days, so I pretty much laid there and stared at the ceiling for an hour and got more radioactive.  I tried to think of the super powers I wanted but when I realized that all of the ones I was coming up with – flying, teleportation – were just ways to get around Los Angeles traffic, I gave up.

After the hour was up, Jake came to escort me to the scanning room.  It’s worth noting that in this big, high-tech room with the massive PET scan machine, there was more of the gaudy decor scheme on the walls.

The PET scan machine looks like a CAT scan or MRI machine only instead of one big donut shaped thing there are two.  I’m pretty sure this is where donut craving started.  Because the donut holes are fairly narrow and I am not, I had to lie with my arms above my head, bent at fairly awkward angles.  “You have broad shoulders, so this machine is going to be uncomfortable for you.”

Tell me more about my broad shoulders, Jake.

Because Jake is incredibly thoughtful, he provided a pillow case for me to put my arms in as they “rested” above my head.   I have since found out that some of the newer machines have arm rests but I always recommend that people take a pillow case with them in case they don’t – your shoulders will thank you.

Then it was about an hour of lying in the uncomfortable position and not moving while the bed slid in and out of the donuts.  It isn’t loud like a CAT scan or MRI or whichever one is really loud – in fact, it’s mostly silent except for a faint whirring noise somewhere in the distance and the sound of the air conditioning that keeps it cool.

At the end when I was extracted from the donut holes, Jake asked me how I was doing and I said, “Worst. Carnival Ride. Ever.”

A bit of sitting to regain my equilibrium and that was that.  The whole thing took about 2 1/2 hours.  Oh, there was another 30 minutes added in when I realized, as I pulled into the donut shop parking lot, that I had dropped my wallet in the facility somewhere.  The wallet was found and I got to see Jake again so it all worked out okay.

So now we wait… I have an appointment tomorrow with Dr. Wile E Coyote, Super Genius to get the results.  Perhaps I will stop and get more donuts on the way to his office.