Presently I am in my second day home and things are going better than they did yesterday.  I will spare you the gory details but let’s just say there was stuff coming out of places it shouldn’t have been coming out of and it caused more than a bit of concern.  I was considering going back to the hospital but then a home-health care aide visited and talked me down off the ledge and all is okay today.

I’m exhausted and not doing much more than watching TV and occasionally going back and forth from the bedroom to the bathroom to the living room.  It’s my own little habitrail only without the day-glo plastic colors.  I did manage to make it downstairs to start my car just because I could.  I needed a nap afterward.

This will be bulk of the next few days until Wednesday of next week when I have my follow-up with the surgeon to get my staples and hopefully this stupid tube that is sticking out of my body removed.  The latter is a feeding tube that caused a lot of problems.

Going back two weeks, as I said in the last post I don’t remember anything after the anesthesiologist said “we’re going to give you something to relax” and I said, “yes, please.”

My next, thankfully very hazy and vague memory is being tied down to a table, unable to move even my fingers, with something down my throat.  And yes this is memory and not a hallucination.  It’s just a flash but it is there and I’d like to get rid of it now please.

The story behind the memory, that I learned later, is that I didn’t enjoy the ventilator very much to say the least.  If you read this blog before the surgery you may remember that the idea of being on one was almost as scary to me as the rest of the surgery and all of the stuff that came with it combined.  Apparently this extended to the part where I actually had the ventilator tube down my throat.

I struggled and thrashed when I came out of the anesthesia that evening and they had to tie me down and paralyze me so I wouldn’t injure myself.  Unfortunately they didn’t do it quickly enough but we wouldn’t find that out until Sunday.

They removed the ventilator on Saturday and I have only a vague memory of that as well.  The rest of Saturday is equally hazy – I just remember pain and the horrifying hallucinations I was having every time I closed my eyes (and sometimes when my eyes were open).  I’ve decided not to recount them here – they were just too grotesque and even now when I think of them I get clammy and anxious.  Just trust me when I tell you that closing my eyes was not something I relished.

By Sunday the pain in my abdomen had increased and my stomach was becoming distended.  Again, this is not something I remember in a coherent memory – it’s more information that has been given to me and that I pieced together with the bits that I do remember to form a memory hybrid.  The one very clear memory I do have is that just after I got a shot of morphine sometime Sunday afternoon, I was pierced with an unbelievable lance of pain and I couldn’t breathe.  I freaked out and had, at my count, 5 or 6 people in the room with me trying to figure out what was wrong.  All I remember saying is “don’t put me back on the vent, don’t put me back on the vent.”

The pain subsided but this scary attack was enough to get an urgent call in to Dr. Frenchy.  He came back in, took one look at me, and said, “We’re going to take you back to surgery.”

“Okay,” was about all I could manage.  I do remember agreeing to it and I also remember not being worried or anxious about it.  Probably all the painkillers they had me on.

I didn’t find out the details of what happened until my last day in the hospital.  Apparently during all the thrashing when I was on the vent before they paralyzed me and tied me down, I pulled the feeding tube that was (and is) in my intestine.  It tore the intestine and my abdomen was filling up with waste material that was very quickly turning me septic.  It is probably not too much of an exaggeration to say that if they had not gotten in there Sunday night to fix all of this, I probably would not be here typing this today.

But fix it they did and by Monday I was back in the ICU, still hooked up to tubes and monitors and more while the hallucinations continued and I became the ward “zombie.”  I remember a nurse describing this to me – it’s a person who won’t sleep because of whatever reason – the painkillers, the hallucinations, they pain – and so they just kind of lie there, staring at the walls.

The Walking Dead is one of my favorite shows so maybe I was just working on my audition. 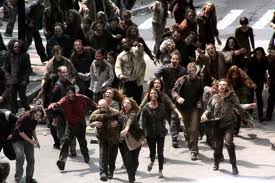